In 1972, the Nitty Gritty Dirt Band produced Will the Circle Be Unbroken, a milestone project with the greats of old-time county music. This 2002 concert reunited some of those greats, and added some more, in celebration of its 30th anniversary. In addition to the band, the concert features Earl Scruggs, Allison Krauss, Randy Scruggs, Jerry Douglas, Del McCoury, Jimmy Martin, Vassar Clements, and more.

The Nitty Gritty Dirt Band was a California jug band, playing country rock and best known for their version of Mr Bojangles. In 1972, their idea to reunite the greats of old-time country became a series of three albums that has captured  some of the definitive performances from some of country music's originals. Be sure to read the Wikipedia article, if you're not familiar with it. It's quite a story, and it's wonderful music.

WikiPedia: Will the Circle Be Unbroken 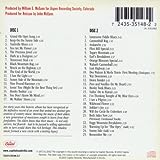 Will the Circle Be Unbroken (30th Anniversary Edition)
List Price:
Currently at Amazon: $12.72